Last night I watched Footloose with my daughters. When I first saw the movie, 30 years ago (gulp!), I was mesmerized by the developing romance between Ariel and Wren, played by the always dreamy Kevin Bacon. I wanted to be like Ariel, the beautiful, brazen girl that all the boys liked. But watching the movie now, in my 40s, I was repulsed by Ariel. She was a pathetic, narcissistic bitch with a death wish. 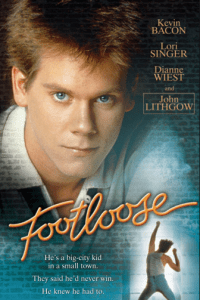 Early in the movie when she decides to straddle two fast-moving vehicles as a semi-truck nears them for an almost-certain head-on collision, she cheers and dances while her helpless friends scream at her to get in the truck. She does so at the last minute, almost killing all of them. Bitch.

Then, later in the movie, she pulls a similar stunt on Wren, as she stands and screams in front of a moving train scaring the shit out of the engineer and Wren, until he tackles her off the track. And she wonders why he won’t kiss her? Talk about pathetic and needy. What a nightmare!

And then there are other things in the movie that bother me: After Ariel is beaten by her ex-boyfriend, no one seems to question her about her black eye. She’s the preacher’s daughter for God’s sake. Wouldn’t HE notice? He seems to know everything else going on in that town. 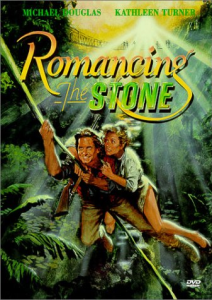 I know it’s just a movie, pure fiction, but as an adult, these are the things I now notice when I watch old movies. We watched Romancing the Stone last week, and I couldn’t believe how gray Kathleen Turner’s teeth were. It’s also a bit alarming how much smoking was glamorized in movies a few decades ago. In The Great Outdoors, the teenage love interest of John Candy’s son, puffs on a cigarette and makes it look cool—at least that’s what we thought back then. 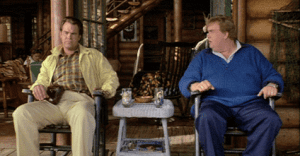 But of course, you get gray teeth when you make smoking sexy. Teeth whitening hadn’t hit its stride in Hollywood in the mid-eighties, but I’m kind of glad about that. It was a little more realistic than all these celebrities today with perfectly white, straight teeth. Even Kevin Bacon had crooked teeth in Footloose, and it was charming.

I’m not sure which ’80s flick we’re going to watch next, but I’ll bet I notice plenty things I didn’t see, or want to see, the first time.