Fashion is Satisfaction for Laura Laine

Many young women are caught up in fashion and trends, but it’s usually aspirational—a garment they hope to acquire or a style they can pull off as well as the model. Illustrator Laura Laine, based in Helsinki, is a bit different. She actually worked as a model, but her interest in fashion was less about ready-to-wear and more about ready-to-draw. “I studied fashion design at the University of Art and Design in Helsinki, but I wasn’t really sure what I was doing at the time, or if it was even something I wanted to seriously pursue,” she says. “During my studies, I realized that designing was not my thing at all, but I loved illustrating fashion. I went on to pursue that and was lucky to start working while still in school.”

Laine had always had a penchant for drawing, and she was quite good at it at a young age. Her parents were both artists, so it was encouraged. “I was quite ambitious. I had a need to outdo myself again and again, and was never satisfied for very long,” she admits. She perfected her craft, and her style has perpetuated the fashion landscape.

Her portrayals of women are often detached looking, with eyes half shut, button-like noses, and small, pouty lips on a smooth white face encircled with long, flowing hair. “I like to draw girls that are complex. I think the gaze can be sometimes described as dead, but I’m not trying to depict depression or passivity, but strength. I’m also interested in these faces that look a bit menacing by nature, but without any particular emotion behind it,” she explains. “What’s interesting is that different people interpret the emotional states of my girls very differently, so I’m happy to leave it open.”

In contrast to the deadpan gaze, her characters’ elongated bodies are whimsically posed to promote cosmetic and fashion brands. “I like the contrast between static and active motions, so the face might be still but the body is in motion. It makes the character both inviting and unapproachable at the same time. I like the complexity.”

The hair is a different story. For her, it grounds her images in reality. “Despite the distorted human anatomy in my images I still like to maintain a sense of the real in them, so I can only go so far with the distortion,” Laine explains, adding, “But with hair I can go crazy, and push and pull as much as I like. It’s a very versatile element for compositions and mood. I love volume and drama in an image, and the hair, along with clothing, are very good tools to create that.”

This style caught the attention of publisher, Fashionary, who asked Laine to illustrate 16 iconic fashion handbags for a postcard book. The objective was to have small girls interacting with the bags. “They decided on a selection of bags for the book, and I was to come up with the way each would be portrayed with the girls,” she explains. 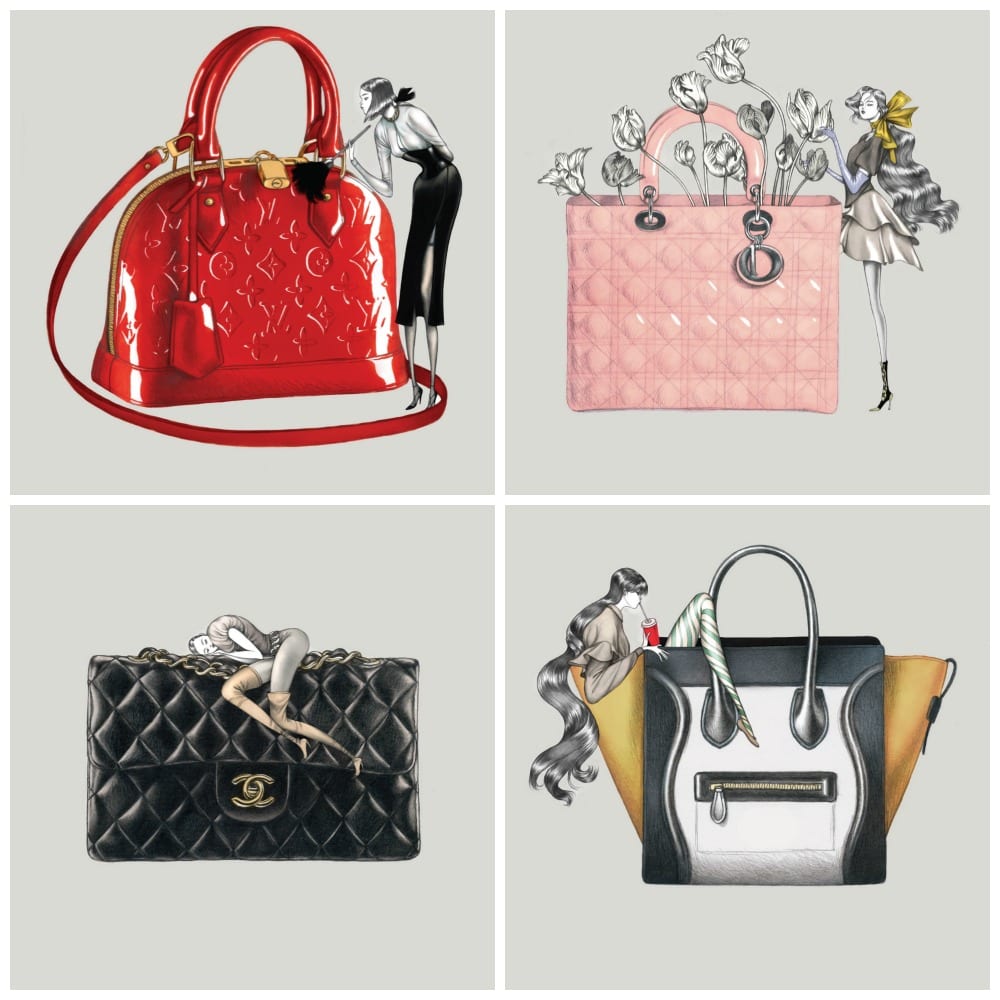 She first studied the bags to get a sense of the different angles she could draw, and to see the materials they’re made of. “I was taking the bag as a starting point, and went with that mood for the look of the girls. I hoped that the two elements would complement each other, not only in terms of the movement and interaction, but with their features.” For example, the Louis Vuitton bag is polished and shiny, so she illustrated a modern maid dusting it–but not any maid. She’s dressed to the nines in an alluring outfit. “She brings out the sexiness of the shiny red leather bag,” she notes. “The interaction is also about emphasizing certain qualities in the bags. The stiffness of the Dior bag works well for arranging flowers, and the quilted Chanel bag doubles as a couch. It was a lot of fun to come up with the stories for the images.”