I had a bad experience with a male doctor a couple of years ago, so I started going to a nurse practitioner, who I really like. She has the best bedside manner, asks thoughtful questions, and is really knowledgeable. The other guy was an asshole. Unfortunately, she works at a clinic downtown, which never really bothered me, until today.

This clinic mainly caters to lower income people, because of its downtown location, so it can appear a little rough at times. But, I don’t go there for the atmosphere. I go because I like the service I receive, and I’ve never had a problem—that is, until today.

A man who wreaked of cigarettes and alcohol stumbled over and sat directly in front of me and asked if I had a stick of gum (because that would help the stench pouring off of him). I did, but I said no. I just wanted him to go away. Instead he parked himself there, and said he’s sorry for bothering me—not realizing that by sitting there and staring at me, he was bothering me and making me uncomfortable. He was the poor man’s version of Frank Gallagher on Shameless. If you’re familiar with the show, you understand how absurd this statement is, because there’s no one more pathetic than Frank … except this guy. Frank, is downright affable and charming next to this guy.

He stands up and goes into the restroom, and I’m relieved. I look up and lock eyes with a man dressed as a woman and exchange a knowing glance, like “That guy is fucking crazy! Mmm-hmm.” (I really thought that guy/gal was going to be the most memorable part of this visit). Then, lucky for me, crazy Frank walks out of the restroom, comes back, touches my knee, and sits in front of me again.

He says, “You gotta man?” I say yes. He says, “I gotta joke for you to tell your man. Wanna hear it?” Shoot me. I’m trapped. What the hell am I going to say? Ok, I tell him. “Now after you get your man all tucked into bed and warm and cozy, you tell him this, OK? You have to look at me, because I can’t hear real well.” Shit. He starts talking again, and then thankfully, a nurse opens the waiting room door and calls my name. I jump up and start walking, and the guy says, “Wait, don’t you wanna hear the rest of my joke?” I shout, “No!” as I raced out of the waiting room. 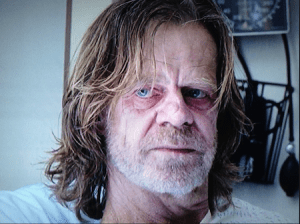