Finding the perfect typeface for your next project takes skill and know-how. Here we put together three different takes on type and why they work so well.

Type says a lot about a brand. Letters are a language in themselves, communicating personality traits like sophistication, simplicity, and whimsy. They can shout or they can whisper. It’s also very subjective, so knowing your audience is critical. With so many typefaces to choose from, it can be overwhelming—and nearly impossible—to make the right choice for your client. 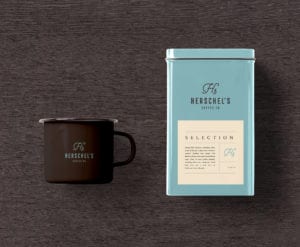 Usually, the simpler a logo is, the better. Such is the case for the logo mark for Herschel’s Coffee Co., in Amsterdam, designed by Mustafa Akülker of Monajans. “I wanted the design to be very minimal, so I used a sans serif for the logotype, but then went with an italic serif Hs for the optional logo in contrast,” he says. “I like the softness of the brand with the italic font.”

The Hs can stand alone as an identifier or be used with the full name of the coffee shop. When used with the name, it’s like the crown jewel—that added touch of elegance. The soft curves of the uppercase H next to the lowercase s, create an almost theatrical overture.

A big part of the success of this identity is also the subtle, yet distinct, color palette. “You can see various tones of brown by imagining coffee beans and milk mixed together,” he notes. “I also wanted to emphasize the memorability of the brand by using blue because it’s a nice companion to brown. It adds sophistication and class, much like how I envision a discerning coffee drinker.”

Pro Tip: It can be tricky pairing a sans serif with a serif. Test many variations and ask others their opinions about what is and isn’t working and why. 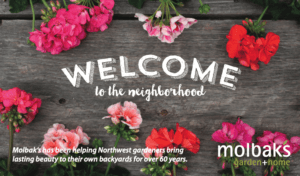 When you have a beautiful product, show it off with great photography. There’s nothing more luminous and captivating than the natural landscape, and Molbak’s Garden + Home store, in Woodinville, Wash., uses photography to great effect in their seasonal promotions featuring lush, living plants. Designer Cindy Tyler explains, “Appealing photography is essential, as is the styling. We aren’t just selling plants, we are also selling ideas and inspiration.”

For instance, Molbak’s Lookbook provides recipes, gardening tips, and useful information about plant varietals so consumers make the right choices when purchasing plants to harvest. The photos are often featured full page, with content creatively overlaid. The hand-lettered headers were part of an overall brand strategy incorporated a few years ago to create a more hands-on, friendly feel, similar to chalkboard lettering. However, due to the volume of materials she produces, Tyler says, “It’s not possible to have them actually done by hand, so I went with the next best thing – a computer-generated font that looks hand-drawn. We also use our standby sans serif face (Myriad Pro) for larger amounts of copy.” And it works. Coupons, mailers, and the website all incorporate this open, inviting style.

Pro Tip: When placing type over photos, find the greatest contrast and most visually interesting layout to draw the reader in and complement the imagery.

The Maisons Paysannes de France was formed in 1965 to preserve buildings and rural landscapes that were abandoned during the rural exodus. However, more than 50 years later, its identity was outdated and overlooked so the association commissioned Graphéine to bring the brand to life. Art director, Jérémie Fesson, did just that by designing an entire alphabet, called MPF Display. The letters in this dedicated typeface can be dismantled and shifted to create patterns evoking construction and movement of architectural elements. Every visual form was considered from the accent marks and punctuation, to the dot on the i.

The stencil lettering, in essence, deconstructs to create unique, decorative elements that are in constant flux. The letter variables are played out in print and online. There’s even a video demonstrating the fluidity of the letter parts and the different ways they can be played out. Each element flutters and flows beautifully on its own and when firmly planted in place on its letterform. “Some letters, like the a and s, have several different writings: This small detail—which often goes unnoticed at first–gives a singularity to the graphics that represents the spirit of a peasant house,” says Fesson.

Pro Tip: Be sure to consider every moving part, including letterspacing and punctuation when designing an entire alphabet. Each detail is critical to its success.