Marika Maijala, based in Helsinki, Finland, has always loved books. In fact, she says that reading helped her survive her “tough teenage years.” It wasn’t until later, though, that she discovered that she could make a living illustrating stories. Fortunately, her love of reading has helped her succeed in her career as an illustrator, because it’s one of the most important functions of the job—getting a feel for the characters and their thoughts and actions. “I usually read the manuscript a few times and then let it live in my head a while, before starting to sketch the images,” Maijala explains. “I trust my intuition, so oftentimes the number of the spreads and the outline of the story come quite naturally. I somehow see the story like a film inside my head.” She often tries different adaptations and approaches when it comes to composition, color, and even characters, but finds that the first iteration is usually the way to go.

Of course, before getting too far on any project, Maijala must get approval on her creative output from the publisher and author. She notes that in many instances once the initial direction is approved, she’s free to continue in that direction for the remainder of the project with little input. But that’s not always the case. “For the first book for Etana Editions, Piano Karkaa (The Great Escape), I made many versions of the storyboard and the illustrations. We initially prepared the book for the Bologna Book Fair, and from feedback we received, we made changes both in the story and the visuals. I learned a lot with that project,” she says, adding that she prefers some back and forth with editors and art directors, because it usually results in a better book.

For Miljoona biljoona joulupukkia (Million, Billion Santa Clauses), by Hiroko Motai, Maijala had to rethink her illustration style. “I loved Hiroko’s style of writing—you rarely get to read such a minimalistic and poetic text, perfect for a picture book. But I also immediately felt that any of my previous styles wouldn’t fit this story, so I decided to develop a new style,” she explains. “But funnily, it came quite naturally. I just tried to follow the light, child-like tone of her writing. It was a very important project for me, because it allowed me to be more free and impressionistic with my pictures.” 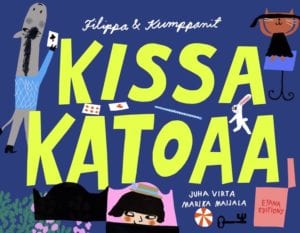 Color is a huge consideration in Maijala’s work, but it’s often challenging to specify the right color when transferring handmade art to the desktop. “I see the color in my head, but making sure it prints that way, is another thing. For the Piano Karkaa and Kissa Katoaa (The Lost Cat), I manually marked the CMYK values of each color in each image on the proofs, and then art director Jenni Erkintalo made the change in the design files,” she explains. “When using this system, you really will see the end result only in the final printed book, especially when using the fifth Pantone color, as we did. I have certain color palettes that I love, but I like to challenge them as well, not to get stuck with one palette.”

And there have been times when she’s been disappointed with the final outcome. “For me, it is always difficult to see the final printed product for the first time. There have been books that I have been able to look at properly only after months after publication. That’s telling about the process: If the process was difficult, I have mixed feelings about the result,” Maijala notes. “One time the paper had been changed at the printer, and I was severely disappointed. I was worried that people would think I was the one who chose that unpleasant material for the book.”

Maijala is lucky in that not only does she work for publishers, but she also collaborates and creates with author Juha Virta. “We create the story together, and then Juha writes the text and I make illustrations, and we both comment on each other’s work, throw ideas and make changes, if something isn’t working. I really like the process of working this way,” she notes. They have done five books together.