Designer/illustrator Felix Sockwell is known for his illustrative, fluid line work. When looking at his pieces it appears that his pen never left the page, as each idea and object is interconnected into a larger narrative. This quick wit and ability to translate seemingly complex ideas into simple, iconographic solutions have gained Sockwell many fans and clients. But it’s not all fun and games. Occasionally, even he hits a wall with a client.

Below, Sockwell walks us through three design projects that were killed, and explains why he believes in reincarnation. 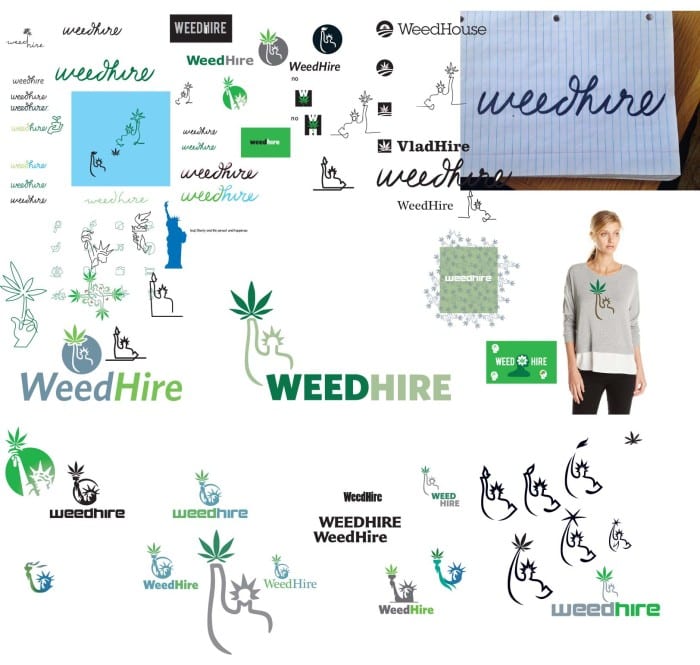 My soccer pal Vlad called and asked me for a “favor,” one in which I did not take to mean as “free” (which would come back to haunt me). He is one of my best friends and most of us on the soccer team consider him wealthy (he wouldn’t). Regardless, he’s a great guy—smart in business and a family man.

He tells me he has a new business called Weedhire, an employment agency for the cannabis industry. He said, “You’re the expert. You tell me what works. Just do something fast.”

What Vlad probably didn’t realize is that designing an identity is kind of intimate, like sex. It takes time. You have to talk. And talk some more. And be honest with one another.

I showed Vlad a few things and his response was to take all the creativity out of it. He said, “Make it look like a bank.” So as I began researching bank logos, I started feeling like a conversation was needed. I picked up the phone and asked if this was intended to be more than a conservative place to find a job in the cannabis industry. I never got a clear response on what the strategy is or was, but by the third day (when I realized I had just wasted a lot of energy doing logos for free), he said he would just have his web designer pop a pot leaf in a box in five minutes. Which is exactly what he did.

I hold no grudge (OK maybe a little, I’m showing the work here), but what struck me about the experience was that some people—good, smart people—care absolutely nothing about how a logo looks or speaks. Design is a HUGE part of your business plan if you’re in the “people” industry. The “lady leaferty” in the center, which I believe to be a smart, conservatively drawn, creative idea, is an idea that I hope someone sees and actually wants to pay for. See the other two projects here.