Herman Miller is the master modern furniture maker with eclectic, ergonometric products for home and office. For more than 100 years, the company has enjoyed economic highs and weathered economic lows. No one better captured these highs and lows than Steve Frykholm, former vice president of creative design, who for three decades told the tale of Herman Miller through stunning annual reports.

Among the finest ever made, Steve Frykholm’s annual reports for Herman Miller are far more than summaries of financial data; they are stories of people and the products they make. Frykholm demonstrated his love for the men and women of Herman Miller with annual reports that swept awards and became collectible. Today, these books stand as text book examples of design at its best: human connection through creative courage, audacity, ingenuity, and flawless execution. “It was never just about me,” he reminds, “I was surrounded by talented men and women who brought these books to life.” Humility is perhaps the least acknowledged secret to success—and longevity.

Now (sort of) retired, bearded, and bespectacled, Frykholm contracts with Herman Miller as spokesman for the company’s design and culture. Speaking at the the 2017 Hopscotch Design Festival in Raleigh, NC, he did what he has done his entire career: he left the audience wanting more. Afterwards, we contacted him to ask him if he’d share more detail that time in Raleigh did not permit.  Below, more of Steve Frykholm’s fantastic stories about his favorite annual reports.

This shows the inside of the report, but all the “action” was on the wheels inside the diecut. Even though it was a good year, for fun I printed a lot of it in red ink! The CEO, Hugh De Pree, sent me to our legal counsel for approval of the whole idea. I’ll never forget what he told me to ask the attorney. “Don’t ask him if he likes it. Ask him if we can do it.” Hugh liked the report, and he wanted something special and original because he was appointing his brother, Max, to become CEO. It was Hugh’s last report. Jim, the attorney, gave us the green light. I never did ask him if he liked it or remembered it. In the last few years before his death, I would run into him and his wife at the Ballet. He was always a gentleman. Creative director: Frykholm; Design: Gary Cronkhite; Words: Melissa Brown

We were inspired by literary philosopher Michel de Montaigne and the way he went about storytelling. The CEO, Kermit Campbell, was brand new to the company, and we wanted to get to know him, so he and another writer, did the short essays within the report. The essays were on different topics and roles at Herman Miller, so there was something for everyone at the company. We also changed the format. It’s more like a paperback. Design: Frykholm and Yang Kim; Illustration: Guy Billout 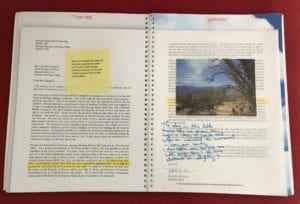 This one was designed while the report was at the printer. The CEO showed us a little note that he got from a shareholder, and he said, “What can we do with this?” It was a relatively decent year, so we asked the employees if they had any “atta boys” that they were really proud of, and we got a slew of them. So we categorized them and reproduced them. If they came on company stationery, we reproduced it and made it look real. It was fun, but it was challenging at the printer, trying to collate the pages and keep track of what went where. I also learned about these sensitive scales at the end of the line, and if one page was missing, it wouldn’t weigh the same. It was production gymnastics. Design: Frykholm and Yang Kim 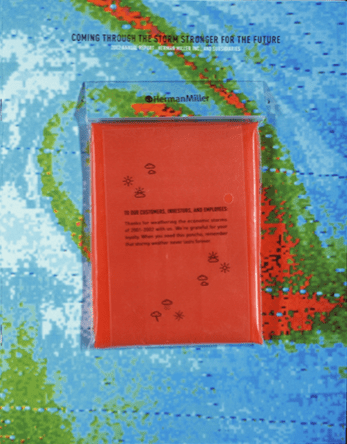 Nobody was happy with the year’s performance. I wanted to print the report on a garbage bag. I prototyped it to fit, I knew we could do it, but I didn’t know who could do it. We did find a supplier to put it on a garbage bag, but they wouldn’t meet our deadline. So I had to go in a different direction. Deborah Sussman was in the office one day and it was raining, and she had one of these cheap ponchos that she bought at an event, so that’s where this idea came from. We printed the report and attached a cheap poncho on the front in a bag that said, “Thanks for weathering the economic storms of 2001-2002 with us. We’re grateful for your loyalty. When you need this poncho, remember that stormy weather never lasts forever.” Creative direction: Frykholm; Design: Brian Edlefson

This was the year that all employees became shareholders in the company, so we photographed every single employee. Remember, this was pre-computer. My original thought was to put everyone in an arena and take a group shot – around 4,000 people. These people were from all over the world, so we had to have a procedure to do this. I was talking to Sara Giovanitti, she was my design shrink—full of positive affirmation. She worked with us for several years on different projects, and she was the one who figured out how to get all these people photographed. It took a few weeks to get all the photos taken. It was kind of like the photographer at the mall shooting babies. We needed some squeaky toys or something to get these people to be more animated. We had one guy doing cartwheels and running around to loosen people up. 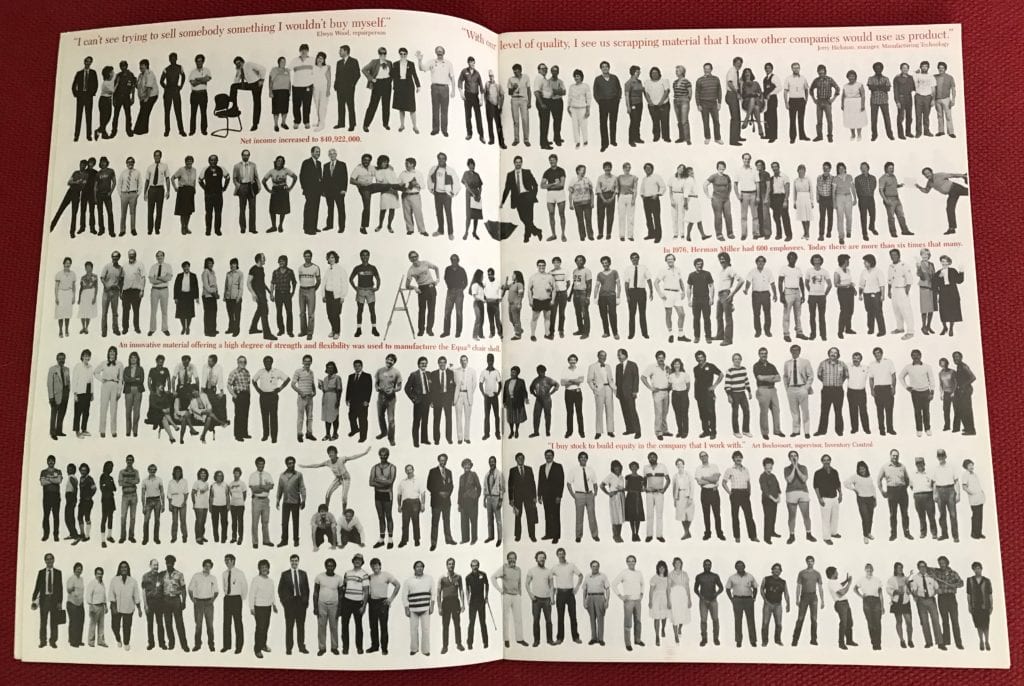 All the photos were outlined by some photo stripper in the stripping room. He probably had carpal tunnel by the time he was finished. And then we integrated people, so someone who worked in the plant, was standing by the CEO. But, I forgot a very important concept. You couldn’t tell the tallest from the shortest person in the group. Everyone is the same height!

This report won every design competition it was entered in and it was reported on quite a bit. It really irritated me how often it was imitated. Why can’t people be original or at least make it better? Design: Frykholm and Sara Giovanitti; Words: Nancy Green